Over the weekend I like to keep an eye on the papers and online-only media for interesting themes and stories to be covered in these articles over the week ahead. And in this week’s edition of The Sunday Times an article by investment journalist Ian Cowie caught my eye. He outlines why he had decided to sell out of plastics group RPC in order to raise the cash for a 2% allocation in his “forever fund” for Mondi, the packaging and paper giant.

It’s not that RPC had done anything particularly wrong. shares were priced at £7.92 when he a profit on the £6.72 he paid for them a year ago in June 2018. That equates to a tidy return of 17.8% over a period which the FTSE 100 has declined by 3.7%. The company has also had a very strong record for some time. But a combination of two considerations – the RPC board accepting a “rather skinny” takeover bid earlier in the year and a desire for a more environmentally conscious slant to his portfolio convinced that was the stock to a profit on and reinvest in Mondi.

So what convinced Cowie to sell out of a stock with a strong history of attractive dividends currently on an upwards trend? Other than the are currently in the bad books of the socially and environmentally aware?

sees Mondi’s future prospects as tying nicely into two major long term market trends. The first is the continued growth of online shopping and the amount of ‘’ and paper used in delivery packaging. points to the wisdom that there is often more money to be made selling picks and shovels than many make from unearthing gold nuggets during a gold rush.

that train of sees just as much, if not more, benefit arising from continued growth in for Mondi and its peers as he does for many actual companies. The second trend is that away from plastics being used in packaging. Consumers have become more environmentally conscious and retailers are responding to that by using more recyclable paper-based packaging. And new legislation banning single-use plastic packaging is also on the horizon across much of the Western world, with Europe, still including Britain, to the forefront. packaging ties nicely into that as “designed to be reused, recycled or composted”.

With those long term trends underpinning the company’s strong fundamentals and the fact that is also a very good dividend payer, currently a 3.4% yield, he thinks the stock currently looks like a bargain. It trades at an earnings multiple of 11 and the share price is down a huge 25% where it was last summer. compares that to the tech giants at the heart of the boom, particularly Amazon and Google’s Alphabet, that trade at earnings multiples of 77 and 27 respectively and pay no dividend.

takes further comfort from the fact that a host of analysts the same current ‘bargain’ in Mondi as he does.

UBS has a £20 target for the company’s shares, which currently trade at £17.34 and comments:

Bank is also positive on rising market demand and has a price target of £22 and Credit Suisse £24.2. Other analysts such as UK stockbroker Redmayne Bentley are similarly positive, putting emphasis on the environmental trend underpinning Mondi’s future prospects. That’s echoed by Rachel Winter of stockbroker Killik who has written:

“Developed economies have been guilty of exporting their waste to China and Malaysia for years, but both countries recently banned this practice, highlighting our need for more recyclable materials and better recycling processes.

“The cardboard packaging industry is expected to benefit from this move away from plastic, as well as the rise of . Less than 15% of global retail sales currently take place online, and as the percentage grows, there should be a corresponding increase in demand for cardboard boxes.

“All things considered, the future looks bright for such as Mondi. Its shares are cheap, the dividend is well covered and the company’s first-quarter results were strong, with earnings growing by an impressive 16%.”

Institutional investors also appear to have long term faith in the company’s prospects. 15% of its stock is still owned by 3 of the largest funds in Africa. is originally from South Africa and while its main listing has been in London for some time it also maintains a dual listing on the Johannesburg Stock Exchange. Other major investors within the company’s top 10 largest holdings include asset management giant Blackrock and Norway’s sovereign wealth fund.

also mentions DS Smith and Smurfit Kappa as Mondi alternatives in the paper and packaging market. However, he feels Mondi’s larger scale and diversified international base gives it the edge. Those two companies are also listed on the London Stock Exchange. For those investing online and happy to diversify currency risk and geographical exposure are there other paper packaging companies worth a closer look at?

With a market cap of almost $13 (£10.3) billion Australia’s Amcor is even larger than Mondi’s £8.38 billion. The company has listings in both Australia and on the NYSE on Wall Street. A p/e multiple of 19.35 is much higher than Mondi’s 11 so Amcor is more expensive but U.S. are generally higher than UK equivalents and the company does offer a strong dividend yield of over 5% at its current valuation. dividend history has also remained fairly stable over the past several years. 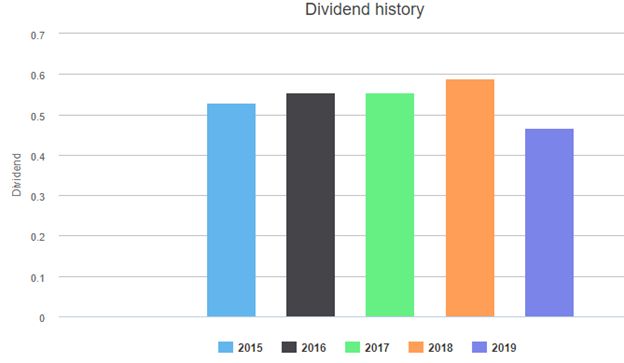 A larger company still, Memphis-based paper, pulp and packaging company International Paper’s market cap of $17.08 (£14.29 billion) billion makes it the sector’s largest company in the world. A p/e ratio of just 10.33 and dividend yield of 4.65% is also attractive. A recent article in Simply Wall Street published on Yahoo Finance argues that International Paper is currently undervalued and represents a very interesting option at its current share price level. The company has gone through a bearish period and currently trades at far better p/e than many of its peers.

Dividends have also been regularly increasing over the past decade and that’s a trend that looks more likely than not to continue.

The Rise of the Robots: Are Robo Advisory Services the Future of..

Everything you need to know about tax-efficient investing

Are Gold & Precious Metals Coming Back With A Bang? And Should You Be..

Bitcoin, cryptocurrencies, NFTs and digital assets 2022: has the..

Why legalisation in Germany & Florida means 2022 could be the perfect..

Investing in the LEGAL CANNABIS MARKET in 2021: The Covid-19 Lull is..

Bitcoin, cryptocurrencies and digital assets 2021: will we finally see..

About 39% of millennials own cryptocurrencies,..