The current coronavirus shock to financial markets may or may not turn out to be more serious than a temporary fright for the global economy. The likelihood is that following another week or two of turbulence and nerves, the pandemic will be brought under relative control and the collective global consciousness will breathe a sigh of relief, pause, and then move onto the next trigger for optimism or pessimism on the future prospects for the global economy.

There is, of course, also a chance that things get much worse before they get better. The virus could evolve into a more virulent version of itself. Or one that has a more serious impact on the health of those unfortunate enough to contract it. That’s not to be alarmist. The much greater likelihood is that Chinese and international authorities, supported by the scientific community rushing for a vaccine, will contain the coronavirus. But a negative scenario can’t be entirely ruled out.

That would have nasty repercussions for the global economy and financial markets. And that tends to mean a rise in gold prices. Why? Because gold is often considered to go to ‘safe haven’ assets when markets run into trouble. When investors get nervous, they often buy gold because of its reputation as having negative correlation to stock markets. That becomes something of a self-fulfilling prophesy, with gold’s price rising when stock markets drop as demand increases from nervous investors.

But does gold genuinely deserve its status as a wealth preserving asset? There is a growing argument it isn’t actually a good investment choice. Even during extended bear markets. Take a look at the chart below tracking the movement of gold price over the past 10 years. It doesn’t particularly look like a ‘safe haven’ investment. In fact, it looks as though gold’s price has shown just as much volatility as a stock might. 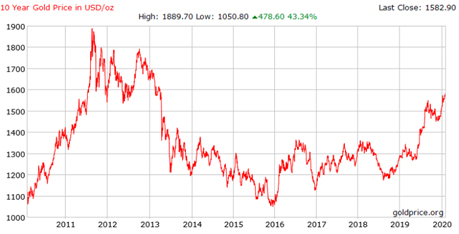 The chart shows gold’s price reached a high of $1,895 an ounce in September 2011 and slumped to below $1,100 at the start of 2016. Since then it has moved up and down before bouncing back up to $1,557 in late January as markets started to get nervous about the impact of the coronavirus outbreak.

A look back into the longer term price history of gold calls into further question whether the traditional refuge for investors who want to preserve wealth should still be considered as such. The commodity hasn’t exactly proven itself as reliable.

In the 1970s, when the UK’s rate of inflation peaked at over 25% as oil prices tripled, gold’s price rocketed. Investors were afraid to hold cash, worried that its purchasing power would tumble. The result was an ounce of gold rising from $65 in early 1973 to $680 by early 1980. A very handsome return indeed.

But anyone who didn’t get out of gold at or around its February 1980 peak, especially if they had bought anywhere towards the top of the market, was hit hard by what followed. Within 2 and a half years, the price of an ounce of gold dropped by 65%. It was 27 years before it would return to that peak. Not quite what investors would be looking for in a safe, steady store of wealth.

The historical evidence, then, calls brutally into question the genuine qualities of gold as reliable store of wealth. The reality is quite the opposite – as an asset gold has proven itself as very unreliable.

And it’s not only gold’s long peaks and troughs that should make investors question its true value to an investment portfolio. Gold is comparatively expensive to hold compared to equities or inexpensive funds such as index trackers. The lowest cost option for gold storage, plus insurance, in the UK, if Bullion Vault’s claim is accurate, adds up to around 0.12% a year. Buying and selling the commodity also costs around 0.5% at each end of the transaction.

Investing in gold coins is much more expensive, with the difference between buying and selling prices reaching up to 10%. Even if you chose to invest in a gold-backed ETF, units of which trade on the stock market like an index tracker, the fees tend to be around 0.25% a year. So investing in gold is not ‘free’ over the period it is held. And unlike equity investments, these costs cannot be compensated for through dividends. Which means they can mount up if held over longer periods of time.

Also, the capital gains, or losses, of equities-based investments are tied to the growth, profits, losses and dividend performance of the company shares are held in. That is not the case with gold, whose value rises and falls purely on the basis of market sentiment. Much of the criticism aimed at cryptocurrencies, that their value is not attached to anything tangible, as nobody, or next to nobody, actually uses them to pay for goods or services, can be applied to gold. Its only really tangible ‘use’ is in jewellery. Gold is often justified as a ‘safe haven’ value because of its ‘inherent’ value. But is that value any more inherent than that of cryptocurrencies when examined more closely? There seems to be a reasonable argument that gold, which has almost no practical use as it’s such a soft metal, in fact has little more ‘inherent’ value than Bitcoin. Is its only real advantage over a digital commodity the fact it has a longer history?

In terms of its price, gold is volatile. It has historically seen dramatic rises and falls in value. So it’ not really a ‘reliable’, ‘safe haven’, investment. It’s certainly possible to make money from volatility by buying low and selling how. But that means getting entry and exit points right, which relies too much on luck. Especially in the context of gold as a way to preserve wealth. Gold looks more like a gamble of an investment than a safe haven.

Perhaps the most serious argument against an investment gold is, however, its historical performance compared to equities. Between 1980 and 2010, the price of an ounce of gold dropped from $500 to under $300. A 20-year bear market. Over the same period the London Stock Market recorded gains in 18 out of 20 years. Since the 1940s, equities markets have been on an upwards trend, only ever interrupted in their ascent for a few years at a time. 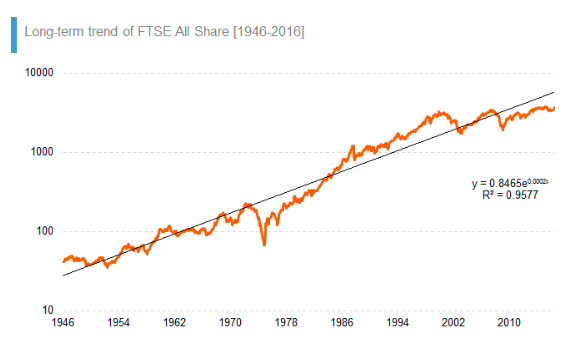 The compound annual return of the FTSE 100 the last 25 years has been around 6.5% with dividends reinvested. This would be a total return of 375%. That’s a lot of returns to have missed out on by holding money in gold.

The conclusion has to be that there are better options than gold for investors looking for a steady or safe haven investment. Low risk bonds or less cyclical, steady Eddy equities such as utilities companies, for example.

Gold has a passionate following and for some ‘gold bug’ investors, questioning its safe haven status is heresy. But do the facts genuinely support the argument of gold as a safe haven investment? I’m not sure they do.

Dollar at 3-year high versus yen amid Fed taper bets

Bitcoin, cryptocurrencies and digital assets 2021: will we finally see..

A Guide to Tax Efficient Investing via EIS/SEIS

Is The $150 Billion Cannabis Industry The Investment Opportunity Of A..

The Runaway Rise of Private Capital