If there was ever a year to show us how quickly the best laid plans can be upended by unpredictably changed conditions it was 2020. Stock market tips are an invitation for analysts to be left with egg on their faces. There are just so many variables that influence the fortunes of a company, both internal and external, that no-one can ever know how they will play out.

But success in financial markets, like busines or life more generally, is not about getting everything right. Which is just as well, because nobody does. Not even the most respected investment gurus.

Instead, it’s about taking as much into consideration as possible. From internal influences such as management excelling to intellectual property pipelines, to external factors like the competitive landscape and technology trends and breakthroughs. By doing so diligently, investors play the odds.

Many of the horses backed may do less well than anticipated, for all manner of reasons. Others will do better. But if an investment portfolio is well researched and balanced, with risk suitably spread, history suggests that stably attractive returns are very much achievable. Especially over a long enough period to even out volatility and the statistical reality that sometimes poor outcomes can inconveniently clump together.

It’s with that foreword/disclaimer that we start this look at a selection of London-listed stocks that look like they have plenty going for them in 2021. Some because their valuations were clobbered by the ‘black swan’ event of 2020’s Covid=19 pandemic. Others for more general reasons.

Inevitably, they won’t all work out as anticipated. But we do think there is enough going for them that, all things being equal, enough will for the selection to come out ahead of the market. Consider them stock market investment ‘ideas’ for 2021 for you to look into in more detail!

We’ll split this into a small series, with each article focusing on a different category of company. In this first part, we’ll focus on companies hit hard by the Covid-19 pandemic that look well placed to see their share prices bounce back once life returns to something approaching normality.

Commercial property landlords have been among the worst hit by the Covid-19 pandemic and Shaftesbury has been no exception. Most of the company’s portfolio consists of upmarket West End London commercial properties such as bars, restaurants, shops and office space.

With most of the tenants of such properties forced to shut down or severely restrict operations for much of 2020, rental incomes have taken a battering. And heading into the last few days of the year, Shaftesbury’s share price is down almost 40% on where it ended 2019. 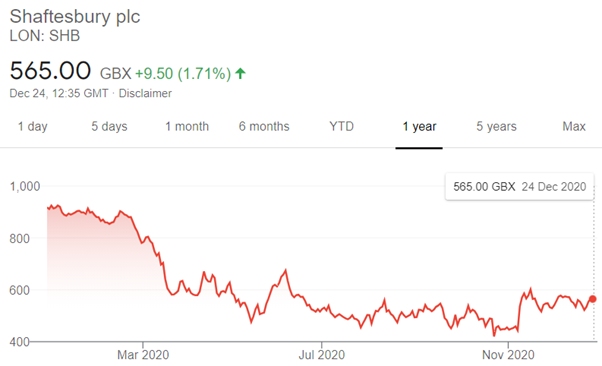 Shaftesbury managed to collect just 53% of its rent dues over the six months to the end of September. And it’s unlikely that the company’s fiscal second half of the year will show much improvement when financial results are published a few months from now. It could well be worse. The situation has also knocked £3.1 billion off the market value of the property assets the company owns.

But the company looks reasonably comfortable, having raised £294 million from investors last month to leave its loan-to-value ratio at a very reasonable 31.5%. Capital & Counties, another big landlord which owns much of Covent Garden, where Shaftesbury also owns hundreds of shops, restaurants and bars (much of the rest of the portfolio is in nearby Soho), also took a 26% stake in May. That means a takeover, which would be expected to push the share price up considerably, is a serious possibility.

Shaftesbury boss Brian Bickell has confidently declared that a West End commercial property market recovery is a question of “when, not if”.

That’s a sentiment it’s hard to argue with. And with Shaftesbury’s valuation yet to see any real recovery since plummeting in late February and March, it looks like there is a good prospect of solid gains to come in 2021.

The aviation industry is another whose fortunes were worst impacted by 2020’s unique conditions. International travel almost entirely halted for a period from March. Even a brief respite during the summer months when some international tourism was encouraged, before quickly being discouraged again, couldn’t do much to save the sector’s overall passenger numbers.

Of the London-listed airlines, which also include Ryanair, Wizzair and BA-owner IAG, budget airline Easyjet’s valuation has been worst affected. The company’s share price fell by nearly 70% earlier in the year and its recovery has been slower than that of rivals. As of December 24th, Easyjet’s valuation is still down over 40% on where it finished 2019. And the share price is much further adrift of the £16 it had reached before the pandemic struck. 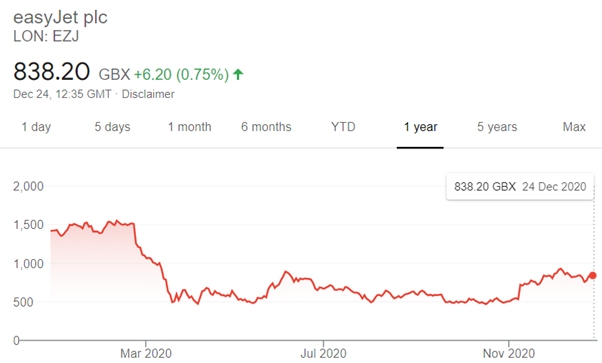 It may well take much longer than 2021 for Easyjet’s valuation to fully recover (though with the right tailwind of bullish investor sentiment perhaps not). But having raised £3 billion in cash to survive the crisis, Easyjet sits in a solid position of liquidity. If tourism bounces back strongly from next summer, the company’s valuation could soar.

Whitbread, the owner of the Premier Inn budget hotel chain and Brewer’s Fayre and Beefeater value restaurant chains, whose premises are most often found adjacent to the hotels, has also predictably suffered a terrible 2020.

While the company says the Premier Inn hotels have outperformed their sector over the year, to increase market share from 7% to 10.5% after reopening in July, revenues still took a huge hit. But the company looks well positioned to come out of the pandemic crisis even stronger than where it entered it thanks to a £1 billion cash call in May. 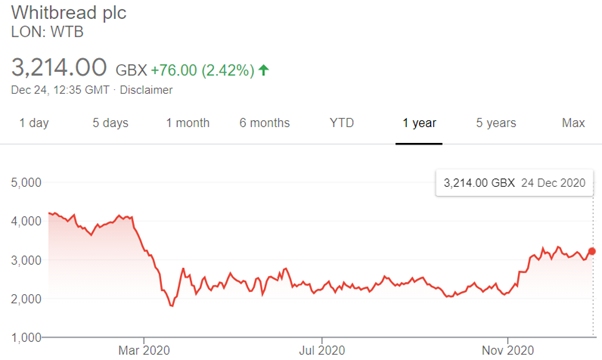 That money was raised from existing investors at a steep 47% discount on the company’s valuation at the time, which sounds, and is, expensive. But it leaves Whitbread in a far stronger position than most, if not all, of its competitors. Investors have already recognised that, pushing the share price up around 40% over the last few months of 2020.

But with Whitbread’s valuation still over 22% off where it finished last year, a possible surge of staycations as lockdowns hopefully start to ease as spring blooms, and more market share to be swept up from impoverished competitors, there could still be some good upside left next year.

Other than those three picks, there are plenty of other companies in sectors badly hit by 2020’s pandemic conditions that could bounce back strongly next year. Those best able to recover quickly and take advantage of the struggles of competitors are likely to be those that combine a strong pre-crisis market share trend with a liquid cash position heading into 2021.

In the second part of this series, we’ll focus on stocks that have not only directly benefited from the Covid-19 crisis, but look like they will continue to thrive thanks to ongoing trends resulting from it.

What is investment portfolio liquidity and why is it important?

The Rise of the Robots: Are Robo Advisory Services the Future of..

Everything you need to know about tax-efficient investing

Are Gold & Precious Metals Coming Back With A Bang? And Should You Be..

Bitcoin, cryptocurrencies, NFTs and digital assets 2022: has the..

Why legalisation in Germany & Florida means 2022 could be the perfect..